This is a project we started when we flew to the island in November 2014. We met with the Principal of the Elementary School and discussed what was most needed, and the Kindergarten Classroom was one of the most important areas that needed rebuilding.

After seeing the building and understanding that the Kindergarten children were currently sharing a room with other pupils, making it extremely difficult to sit and also learn, we decided to go ahead with the project.

Whilst we were there with the funds we had already raised from so many generous donors, we were able to find a contractor and buy the first lot of building materials. We were also able to commence the demolition of the old building and begin to make way for the new!

The best thing about this project was not just that it was helping so many members of the community directly, but the labour and the building materials were all sourced locally, which means all donations were not only going to rebuilding this key community area, but donations were going directly to these people who survived Typhoon Yolanda and it was helping to rebuild their lives too!

Between November 2014 and November 2015 we raised money through the Sheffield Half Marathon in April 2015, the Manchester Marathon, also in April 2015 and also received a donation from an Australian surf board company called TreeHouse Landscapes and Handshapes.

In November 2015, we returned to the island to finish what we had started. In just a few short weeks we were able to finish the building, including putting on a new roof, new windows and doors.

On the 19 December 2015, just in time for Christmas, we finished our project and fulfilled our promise to the people of Sulangan. The school was finished.

We cannot thank everyone enough for helping with this project. From everyone who donated to the workers and the people of Sulangan, everyone played an important part in this project and helped us to finish it.

For the children who survived typhoon yolanda this is for you.

Our founder meets the Principal of Sulangan Elementary School and pledges to rebuild their Kindergarten Classroom! Demolition of the old classroom begins, in order to make way for the new… 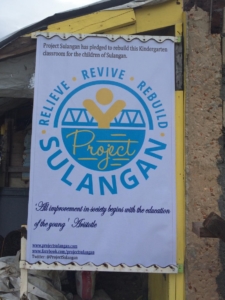 At the end of November 2014, we left the island to return to the UK. We promised the Principal we would return and finish what we started once we had raised the funds.